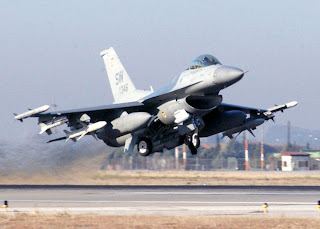 After this last weekends message I received this article from a friend of mine who is a pilot. He served as an F-16 pilot in the military as well as an instructor. I asked his permission to post it in my blog – you will love this real life story from a fighter pilot! Thanks Ned. I looking forward to getting up in the wild blue yonder with you again someday soon.

Flirting with a mishap…when failure is not an option

9Gs in an F-16 forces you down into your seat compressing your spine, overstresses every muscle in your body, squeezes the sweat from every pore, ruptures thousands of capillaries in your forearms, drives blood downward to the feet, and stretches your face instantly aging your appearance 50 years. As the sweat burns your eyes and the Gs restrict your vision, you persevere, adapt, and maintain the focus on flying the jet, straining every major muscle group in your body, and properly breathing with quick bursts of air exchanges while not giving up the fight. It’s all about man and machine against an opponent and a 3-dimensional skill in flux at all times with no definitive answer to any questions on the subject…just lots of opinions and techniques. In the end, killing the bandit with your gun is all that really matters in a dogfight; otherwise you’ve failed in your mission as a fighter pilot and failure is not an option.

“There I was” in a dogfight over the frigid waters of the Yellow Sea, 60 miles off the coast of The Kun (Kunsan Air Base, South Korea) with the smell of burning oil leaking into the cockpit. Should I knock-it-off (KIO) or continue pressing the attack? I’ve smelled this oily, humid air many times after flying a jet that had recently been in maintenance. It should be OK, right? Failure is not an option! After a nanosecond of rationalizing, I elected to continue with tunnel vision, my “fangs” out, and pulling aggressively to gun my opponent. Bad move.

As I carved through the skies in my viper, the burning smell intensified to a point that it distracted me from focusing on fighting and pulling Gs. The logical side of my brain finally engaged and I knocked-it-off, started climbing, and pointing my nose toward home. Good call, especially since the oil pressure reading was now less than 10 PSI which means LAND ASAP! To point toward home first and then analyze the situation is a built-in flight discipline reaction. However, I should have knocked-it-off earlier before allowing my fangs to control my decision making. About all I could do at this point was point toward home, climb, use minimal throttle movements, and pray because failure (ejecting into the frigid waters) was not an option.

It seemed like an eternity before reaching a 1:1 (the rule-of-thumb glide ratio for the F-16 which is 1 mile for every 1000’ of altitude) with Kunsan. Finally, I could relax just enough to allow the seat cushion to reform in the seat. After circling down from high key in idle power and landing the jet, maintenance said I had about 1 minute left on the engine before it would have seized. It was another lucky day and the Lord was keenly watching over me.

The human body is able to detect stimuli long before the mind has consciously put it all together. It should be cut and dry, but the wiring in our brains prevents conscious, logical thought during critical and urgent moments. If something doesn’t look, smell, and/or sound right, then it’s time to KIO. Electing to continue with a known problem is a crapshoot game and a balance between risk and reward. You must keep the focus and discipline to balance out the brain’s weaknesses to prevent rash decisions.

“There I was” seven years later, on a night, Operation Iraqi Freedom combat mission over a ragging sandstorm with troops desperately calling for help. I was faced with the decision of my life. To press and fly beyond the limits of my aircraft and all established rules of engagement or leave these men behind who were being overrun by a numerically superior force. The weather was not conducive to flying an F-16 at night in a sandstorm with zero illumination for our Night Vision Goggles. Without hesitation, my wingman and I elected to continue and descend into the storm where we repeatedly descended below safe altitudes to attack the enemy in near zero visibility conditions. In the end, the troops escaped and were later rescued. We survived through pure will power to not fail; however, it was a balancing act between emotion and logical thought. It was the toughest night of my entire career to balance life with a group of men that I will never know. This was not a situation to KIO for safety and danger. We were deep in enemy territory and no one else was there to help. If a kid was drowning in your pool, you’d jump in regardless of the risk. This night required us to abandon all established rules in order to complete the mission. We had to act now because failure was not an option.

A few years after the war, “There I was again”, but this time in my experimental Vans RV-4. Ironically, I was trying to make it home from a funeral with evening thunderstorms along our route. With my 4-year old daughter in my backseat, I elected to continue home in the dark and land on a dimly lit grass strip surrounded by tall trees. I can still see my daughter’s face lit up by the lighting from nearby clouds. As I reflect on that evening, I’ll admit that I allowed my fangs or emotions to control my decision making in order to get home that evening. Although I mitigated the risk with experience, flight following, extra fuel and remaining VFR over major highways, this was a bad move and I swore I’d never do that again.

How many times does it take for someone to press the fuel, the weather, a maintenance problem, and/or fatigue before learning a lesson? History repeats itself and the only way we can break this mentality is for pilots to avoid continuing the flight when things aren’t right.

Yes, there are times to balance risk with reward such as a rescue attempt or delivering critical medical supplies to a disaster zone. However, more times than not, it’s best to be ultraconservative and wait out the weather, land with more than enough reserve fuel, and avoid that night flight over rugged, unfamiliar terrain.

Electing to continue and putting yourself in a tight corner with high risk is flirting with a mishap. I challenge you to think logically and prevent your fangs from controlling your decisions when things don’t look, smell, or sound right because failure is never an option.