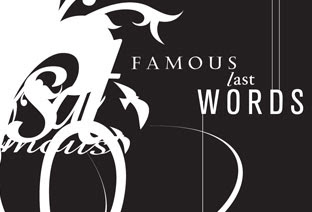 It wasn’t that Jesus was just having a bad day and that He was thirsty when He spoke the words “I am thirsty” from the cross in John 19:28. There is so much more to these few words than a physical need of thirst, although I’m sure it is accurate to say that in the midst of being crucified and nearing His death, Jesus physically was thirsty.

There are many scripture that different scholars believe that Jesus may have been pointing to when He spoke the words “I thirst”. Some say Psalm 69:21; “But instead, they give me poison for food they offer me sour wine for my thirst.” Others say He is quoting Psalm 42:2; “I thirst for God, the living God. When can I go and stand before him?” Either way Prophecy was fulfilled.

I want to go back a little further with these words, all the way back to Exodus 17. God’s people have been in slavery, a picture of us being slaves to sin in our lives, now Moses has led them out to freedom. During their journey through the desert they become thirsty, living in the Sonoran desert it is easy to understand. God’s words to Moses in Exodus 17:6 are; “Strike the rock, and the water will come gushing out.”

We know Jesus in the New Testament as the Rock of all ages that He is the solid Rock we are to build our lives on. For those living in Jesus day they did not have the New Testament Bible, while many of us have many, including several different versions. If we don’t own the books themselves we have incredible tools like YouVersion.com where we can look at over 40 different versions online for free. For the culture Jesus was in, the children of the families of Israel had to memorize Old Testament scripture. In fact, they often were not allowed to leave the home until they quoted verses.

All of the Old Testament verses prophetically pointed to Jesus coming to earth, dying on the cross and resurrecting to life on that first Easter. It would not be a stretched of our imagination at all to consider that Jesus said “I am thirsty” from the cross to point that culture back to the days of slavery and their desire for a messiah, as if to say, “I am the one, I’m here, I have come.” The Old Testament verses and stories were so ingrained in them that they viewed all of life through scripture. The rock that Moses struck in the desert that gushing water flowed from to quench the children of Israel’s thirst was a picture of the Messiah, the rock of ages, the one who says; “Blessed are those who hunger and thirst for righteousness, for they will be filled.” (Matt 5:6 NIV)

Because of what Jesus did on the cross our thirst for righteousness is quenched. He became sin for us, He took our thirst. Consider His words today. Consider how regardless of your hunger and thirst to have a right relationship with God the Father you could not do so on your own, so Jesus became thirsty in your place. From Him, the Rock of all ages, the water of life is gushing out to us today to quench our thirst.